At the end of 2021, Ten-Nine Tech was selected to be one of only ten companies to pitch at NASA’s prestigious 2021 Cycle II Forum, as well as the Advanced Automotive Battery Conference in San Diego. These appearances, together with grants from the Oklahoma Center for Advanced Science and Technology (OCAST) and a nano-manufacturing award from Manufacturing Insights, keep us in the public eye.

If you’d like to be on our press distribution list, please send an email with your request to

You can follow our progress via news articles, social media postings, and press releases. 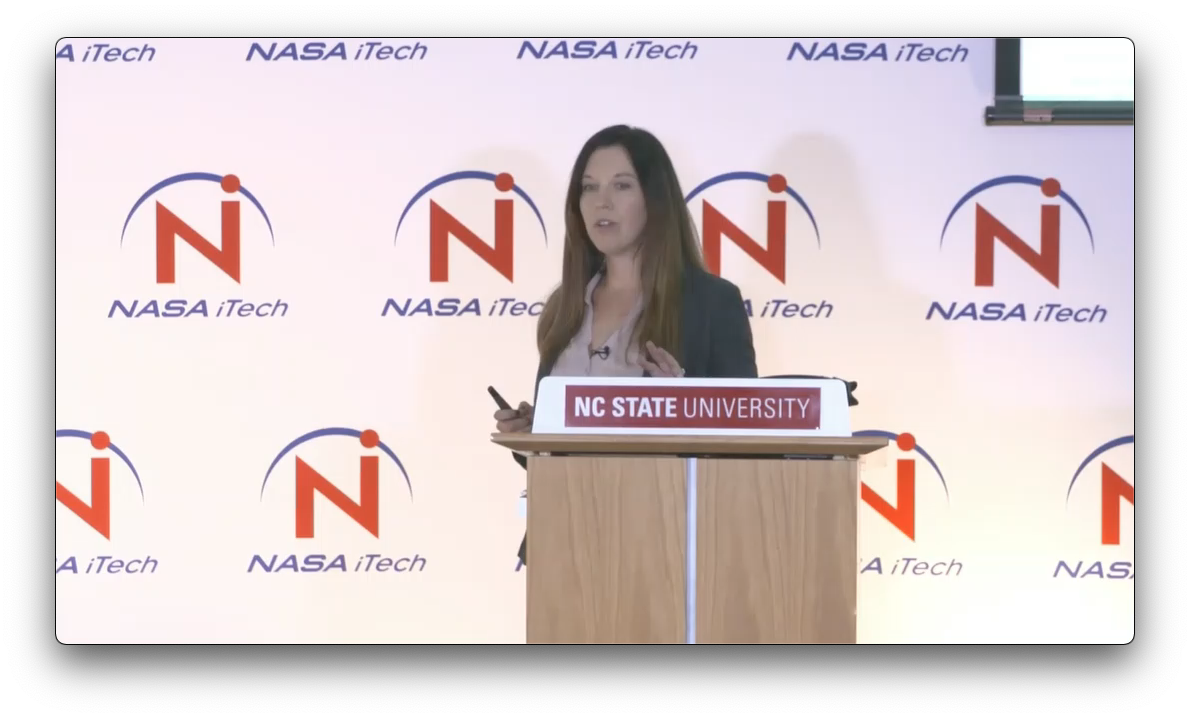 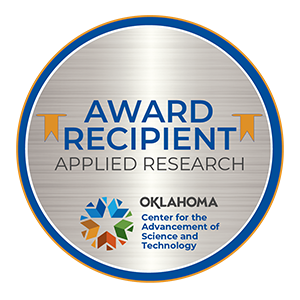 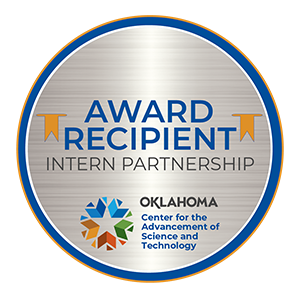 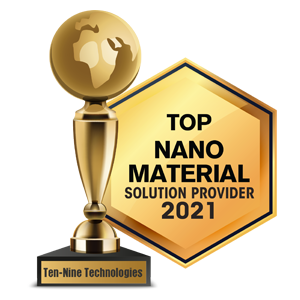 TULSA – Ten-Nine Technologies is pleased to announce the closure of $7 million in bridge financing from new and existing investors. These funds allow Ten-Nine Tech to build out additional production capacity and proceed without hesitation toward early market entry. Expanded lab and testing facilities will also enable engagement with potential customers who wish to validate the use of Ten-Nine Tech’s patented cathode additive, TENIX™, to improve their batteries.

In the fourth quarter of 2021, Ten-Nine Technologies began battery material production at the TN-1 manufacturing plant in Tulsa, Oklahoma. The first run of forty thousand grams of TENIX™ represented a ten-thousand-fold scale-up from four grams in a flask baked in a home oven in 2014. The plant is ramping up to its annual capacity of 24 tons of advanced battery material and will be used to produce TENIX™ for large-scale battery manufacturing trials as well as to define the specifications for a larger TN-2 factory.

Production growth has been accompanied by a parallel increase in organizational capability. Ten-Nine Tech now employs 14 permanent full-time staff along with a similar number of key consultants and interns and is expanding its contracts and partnership agreements with design, research, and engineering organizations. The next production phase is planned for a 10,000-ton annual capacity plant employing 400 people who will fulfill contracts resulting from current evaluation and development agreements with potential customers in the device and automotive sectors.

Founder and CEO, Paige Johnson, is proud of the speed with which her small team has entered early production of advanced battery materials prior to Series B. “When I founded Ten-Nine Technologies in 2014,” says Johnson, “I chose to utilize only synthesis methods that I knew to be scalable and sustainable. As Ten-Nine Tech moves into large-scale manufacturing, these early foundational commitments are showing their incredible value.” Ten-Nine Tech’s corporate culture is agile and efficient, and the company maximizes the use of each investment dollar to create and build new materials for the needs of a changing world.

The addition of bridge funding at Ten-Nine Tech supports a growing portfolio of evaluation agreements and customer trials, continued build-out of production facilities, and requisite workforce additions. Each funding round brings new opportunities and positions Ten-Nine Tech further along the path to revenue generation and full market entry.

About Ten-Nine Tech
Ten-Nine Technologies is dedicated to developing new materials for new economies. Venture-backed and based in Tulsa, Oklahoma, it is led by founder and inventor Paige Johnson.  Tulsa-based production facilities for TENIX™, the company’s patented high energy-density cathode additive, came online with tonnage capacity in 2021.

About Plains Ventures
Plains Ventures is bringing innovative ideas to life by providing the resources, guidance, and support needed to grow successful companies. With over $100 million in assets under management across five venture funds, Plains has invested in more than 60 companies from Seed to Series A across industry sectors ranging from life sciences, software, robotics, and beyond.

About i2E
Over our 22-year history, i2E’s nationally recognized services have provided business expertise and funding to more than 750 of Oklahoma’s emerging small businesses. i2E, Inc, receives state support from the Oklahoma Center for the Advancement of Science and Technology, and is an integral part of Oklahoma’s Innovation Model.

TULSA – Ten-Nine Technologies is pleased to announce that Carolyn Hauger has joined its growing team of chemists, engineers, management consultants, and laboratory testing partners. Hauger brings almost four decades of manufacturing, operations, and hands-on financial management experience to her role as Ten-Nine Tech’s new Chief Financial Office (CFO). As the company moves toward tonnage production at the end of this year, Hauger’s expertise will be brought to bear on every aspect of the manufacturing process. In her position, Hauger will have a key advisory role managing Series A investments as well as looking ahead to future capital projects.

Hauger comes to Ten-Nine Tech after serving as CFO of LION and Clopay Plastics – two companies focused on providing vital industrial goods and services. Prior to 2010, Hauger spent 25 years with Procter and Gamble, starting in operations and finance management roles, and culminating as Global Financial Operations Manager, enabling progressive change in sales, research, and administrative systems. Hauger holds a BS in Chemical Engineering from Penn State University, and an MBA in Finance and Accounting from Xavier University.

As Ten-Nine Tech’s CFO, Hauger taps her manufacturing, finance, and accounting expertise to design systems and eliminate barriers. “We want to get our product out into the market,” she says, “anything that I can do to make that happen effectively is my priority.” Hauger will work with current team members to unlock the power of supply chains, optimize internal processes, and recognize external opportunities. She also brings decades of strategic analysis experience with large manufacturers to her advisory role in spending current investments wisely, while working closely with Ten-Nine Tech’s founder and Chief Executive Officer (CEO), Paige Johnson, to develop future capital partnerships.

“At Ten-Nine Tech, we’re all about creating new materials that make people’s lives better,” says Johnson, “and that means that Carolyn’s background, skills and motivations mesh perfectly with our company, especially as we prepare for tonnage production of our breakthrough new battery material, TENIX™.” Like Johnson, Hauger appreciates the power and the value of people who produce products that make a difference in the world. Her focus, tenacity, and deep skill set will positively impact Ten-Nine Tech’s ability to get battery materials to market efficiently and effectively in Tulsa, Oklahoma.

TULSA – i2E Management Company, Inc. (iMCI) and Ten-Nine Technologies (http://ten- ninetech.com/) are pleased to announce the closure of $5 million in Series A financing for new research and development facilities as well as a manufacturing plant capable of tonnage battery material production. The new funds will also be used to build out Ten- Nine Technologies’ engineering, business development and managerial team and continue development of its innovative battery materials.

Company CEO, Paige Johnson, a noted research chemist and nanotechnology inventor, founded Ten-Nine Technologies in 2014 to develop new materials for emerging economies. She describes the company’s mission as “changing the world from the nanoscale up by thinking differently about the electroactive materials that power it.” Johnson received the Battery Innovation Center (BIC) award for the development of hydrocarbon parity lithium battery technology in 2017.

Ten-Nine Technologies’ proprietary materials, manufacturing procedures and batteries are the subject of four issued patents and 15 additional national and international patent filings. With the addition of iMCI-led Series A funding, Ten-Nine Technologies emerges as one of Tulsa’s first economic engines of the future of energy. Nanomaterials from the line at Ten-Nine Technologies will soon extend the battery life of the things we rely on most.

“Batteries are a foundational technology of modern life, but have not kept pace with other innovations in sustainable energy and advanced electronics. New materials and new approaches are needed to power the electric future, and Ten-Nine is proud and excited to be a part of that, especially in our home state of Oklahoma.”

The addition of Series A funding to Ten-Nine’s balance sheet underscores the commitment of Oklahomans and other regional investors to the future, even in a time of economic uncertainty. This new capital will accelerate manufacturing, market entry and adoption of Ten-Nine Technologies’ innovative battery materials as well as provide new jobs and opportunities for Oklahomans.

Profile of a Founder – Paige Johnson

Tell us the origin story of Ten-Nine Technologies – what problem were you trying to...

The Tech Tribune staff has compiled the very best tech startups in Oklahoma. In...

Startup companies face a virtual Mt. Everest when it comes to gaining industry...

Outlook is bright for advanced batteries

First, there is the Internet of Things (IoT). Prepandemic, McKinsey & Company...

If you asked me to name the profession most similar to entrepreneurship, I would...

It’s high time female founders got the recognition they and their startups deserve...

A venture-backed Oklahoma company hoping to innovate batteries has raised $5...

In the late 1860s, Dmitri Mendeleev, a Russian chemistry professor, devised the...

Carbon Neutral from Cradle to Gate